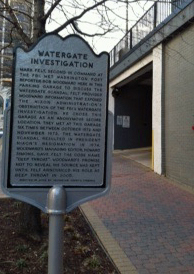 As a journalist in town for more than 40 years, this is my holy ground. A parking garage where secrets that brought down a president were told.

Well, I’m an old newspaper man in this town. A sports columnist for the 106.7 The Fan nowadays, but I’ve been there and done that for several papers since 1978.

Watergate was the biggest story of my teen years. I’ve wanted to be a newspaper reporter since 1972 when seeing my school paper. It coincided with Bob Woodward and Carl Bernstein breaking stories about the Democratic headquarters break-in at the Watergate hotel that ultimately led to President Nixon resigning.

Everybody wanted to be an investigative reporter. It didn’t matter that I cover sports. There are shadows wherever you work. My first big scoop was in 1986 over a high school recruiting scandal. Over the years, I spent my share of time in late-night meetings in public places getting information long before days of cell phones made clandestine meetings less necessary.

I stopped by the parking garage on Nash St. in Rosslyn where a historical marker was erected detailing where Woodward met “Deep Throat,” identified as FBI official Mark Felt in 2005 before his death, a half dozen times from October 1972-November 1973 for information. Parking space 32D. It’s still there.

It was brilliant – hiding in plain sight, as I like to say.

The marker on Nash St. in Arlington, Va. just down the quiet street from the Hyatt bordering Wilson Blvd. says:

“Mark Felt, second in command at the FBI, met Washington Post reporter Bob Woodward here in this parking garage to discuss the Watergate scandal. Felt provided Woodward information that exposed the Nixon administration’s obstruction of the FBI’s Watergate investigation. He chose the garage as an anonymous secure location. They met at this garage six times between October 1972 and November 1973. The Watergate scandal resulted in President Nixon’s resignation in 1974. Woodward’s managing editor, Howard Simons, gave Felt the code name “Deep Throat.” Woodward’s promise not to reveal his source was kept until Felt announced his role as Deep Throat in 2005.”