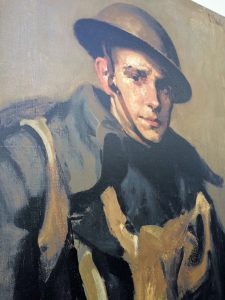 The Arlington National Cemetery Visitors Center remembers “The Great War” with a display commemorating the 100th anniversary of its end. The lobby is filled with World War I paintings, photos and information on the war that changed the world and launched the U.S. as a global superpower.

More than 5,000 Americans serving in World War I are buried at Arlington. Another 30,000 are buried overseas. Some four million Americans served during the war with 116,000 deaths.
The joint exhibit with the American Battle Monuments Commission will have its official opening ceremony on March 31 at 8 a.m. The exhibit will remain until November.