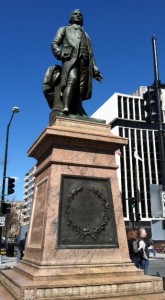 Sometimes, the busiest venues can be the worst places to honor past Americans with statues.

John Witherspoon is along Connecticut Ave. and N St. N.W. on a spit of land barely big enough for the 10-foot statue high atop a granite base. You’d think a signer of the Declaration of Independence would be given a quieter venue, but this site actually has historical merit.

Upset over the crown’s interference in local matters, Witherspoon became one of New Jersey’s signers for the Declaration of Independence. After the war, he returned to rebuild the college.

The Presbyterian minister was remembered with a Bible in his hand and dressed in colonial attire when the statue was erected in 1909 by an adjacent church. However, that church was razed in 1966. Federal officials wanted to relocate the statue, but church members successfully argued it should remain in its original location.

And so Witherspoon does, even if it’s in the middle of madness come rush hour.

By the way, actress Reese Witherspoon is a descendant of the colonial leader.