‘Wild Bill’ was the supreme justice 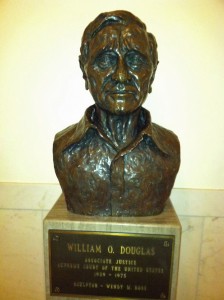 William Orville Douglas served the most time of anyone on the Supreme Court and it still wasn’t long enough for the accidental libertarian.

The Associate Justice served 36 years and 209 days as a Franklin D. Roosevelt appointee who lasted until his 1975 retirement. Even then, Douglas tried to participate in the Court’s business until a 1978 letter from all nine justices informed him he was retired.

Douglas was called the most “committed civil libertarian ever to sit on the court” by Time magazine in 1975.  Indeed, “Wild Bill” survived two impeachments by Congress incensed over his erratic actions.

Douglas was a staunch First Amendment advocate, gave a stay of execution to Ethel and Julius Rosenberg and was a certified tree hugger after hiking the entire 2,000 miles of the Appalachian Trail from Maine to Georgia.

This bronze bust lies in the public hallways of the Supreme Court.