Why are coins left on veterans’ graves?

Why are coins left on grave stones at Arlington National Cemetery? Particularly, the graves of Robert F. Kennedy and his brother Teddy plus World War II hero Audey Murphy.

I thought it was something senseless the school kids did. Maybe something to do with paying the ferryman to carry the deceased across the river to the afterlife.

Recently, a veteran told me it had something to do with those who served with the deceased. Several websites like the Quad City Times confirmed what I’ve heard from vets. 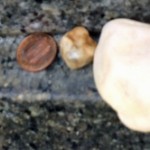 A penny means the person visiting was a friend or acquaintance.

A nickel means they went through basic training together.

A dime means they served in another platoon of the same company or the same battle.

A quarter means they served in the same outfit or were with the person when they died.

The practice reportedly dates back to the Roman empire in seventh century B.C., but carried over to the U.S. after the Vietnam War as a down payment on a future game of cards or beer together. Many longtime guides say they’ve only seen the coins in recent years.

The money is eventually collected and added to the cemetery’s general fund.