Who’s the boss? Why ‘Boss’ Shepherd, of course 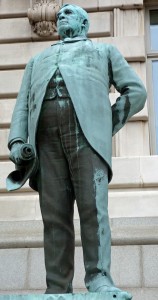 George Washington may be the father of our country and namesake for the our town, but Alexander Robey Shepherd, better known as “Boss Shepherd,” is considered “The Father of Modern Washington.”

Shepherd actually stopped an 1870s movement to relocate the capital to St. Louis after national politicians were upset over Washington’s poor infrastructure. Washington’s governor from 1873-74, Shepherd modernized the city’s infrastructure and even planted 60,000 trees to make it more attractive. However, these costly moves nearly put the city into bankruptcy and forced Shepherd from office amid corruption scandals. Shepherd’s plan to keep Washington as the capital city worked, though.

Boss Shepherd was such a controversial person that Mayor Marion Barry removed this statue when taking office in 1979 and exiled it to the city’s impound lot. I guess Mayor Barry figured there was only one boss in town and he was it. However, in 2005, Shepherd’s statue was returned to its original 1909 spot on the right side of the John Wilson Building entrance on Pennsylvania Ave. near 15th St.

The bronze statue is 18 feet tall, including the 18-square foot pedestal made of Vermont granite. It could use a good cleaning, turning green like many statues. It was created by Washington sculptor Ulric Stonewall Jackson Dunbar, who was better known for his statue of baseball pitcher Walter Johnson and death masks.