I give Booth tours in Washington, D.C. from the White House to Ford’s Theatre. It’s probably the most popular of my many theme tours.

But the story doesn’t end there. Even though I live near the Dr. Mudd House and know many of the escape route sites, I had never been to the actual spot where Booth crossed the Potomac. And then I came across Dave Taylor of BoothieBarn.com, a school teacher who lives in Southern Maryland who has produced an amazing website. Seriously, check it out.

So we went to the Pine Thicket area where Booth stayed four days and nearby Rich Hill, but Dave had been to the river site near Popes Creek, Md. that is private property (so don’t do this yourself without permission) and took us to the waterline. Dave is pictured above pointing to the Virginia shoreline on the left while Maryland is still on the distant right. 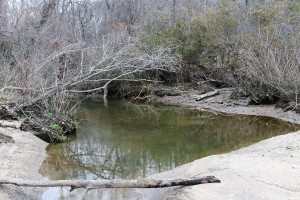 It was pretty cool. We stood where the small creek hiding the boat feeds into the Potomac. We scanned the horizon where Booth failed to cross into Virginia on his first attempt about three miles away while federal troops searched for him on land and water. And we could see where Booth successfully crossed on his second attempt before later caught and killed in Virginia.

Standing in the exact spot of a historical event is always intriguing. We’re lucky to do it in Washington. But standing along the river provides insight into just how hard a task it was for Booth and why it ultimately cost him his life.