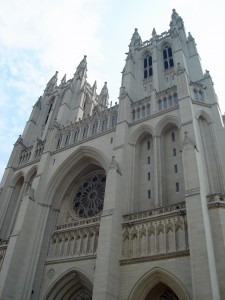 Want to see an old Roman church in Washington, D.C.? The Washington National Cathedral is the closest thing I’ve found since touring Italy.

You may recognize the world’s sixth largest church from televised events like late president Ronald Reagan’s funeral or Christmas masses attended by presidents. I attended a funeral for a basketball player so it’s a working church for everyone.

The church has an old world feel through its stone work, gargoyles and sweeping views. It is 100 yards long, the length of an American football field. Lots of stained glass with a real moon rock embedded in one midway on the right. Plenty of side rooms, eight floors and wonderful grounds.

The church is Episcopalian, though it has a non-denominational feel. Clergy from all denominations preach. It’s an older crowd with few kids, which is nice for those who like mass without a crying baby. The church is so large there are always seats. I especially like when the clergy enters for the mass and their prayers resonates throughout the church. It feels very spiritual.

There are free guided tours, but you can wander about yourself. Here are a few things to see. 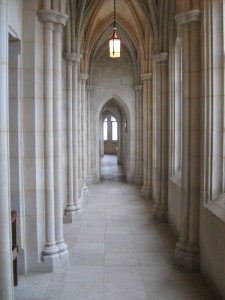 * The enclosed observation deck is a higher elevation than the Washington Monument (because it’s on a hill) so on a clear day you can see all of Washington with better windows than the monument. The lighting and stone work provide excellent indoor photos so take your group shot there.

* The basement gift shop runs the entire width. It is huge. Every type of cross and religious object is available. I liked the Holy Chocolate.

* The outdoor baptistry looks like something out of the Hobbit. It’s now a gift shop.

* There are historic exhibitions on the main level and observation deck.

* If you’re into gargoyles, there’s a grotesque of Darth Vader. Check Washington National Cathedral for its location. (Left side of front, first tower.)

* There’s a pretty cool Abraham Lincoln statue to the right of the main door and another of him kneeling by the stairs to the crypt.

Parking isn’t a problem thanks to a new underground garage that is free on Sundays. There’s also a metro subway stop nearby.

The church is at 3101 Wisconsin Ave, N.W. and not far from Georgetown so combine it with the city’s oldest quarter far from the downtown monuments. Crowds aren’t a problem at the Cathedral aside spring student tours and there are events running throughout Sundays, though it’s open everyday.