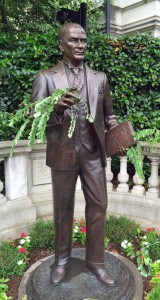 A walk along Embassy Row found a new statue since my last stroll. is in front of the Republic of Turkey embassy’s official residence. “The Father of Turks” was a World War I military officer who later served as Turkey’s first president in 1920-21.

Washington donated space for the statue in 2013. The capital of Turkey, Ankara,, and Washington became sister cities in October 2011. The statue was dedicated on the 90th anniversary of the founding of Turkey. Its sculptor was Jeffery L. Hall.