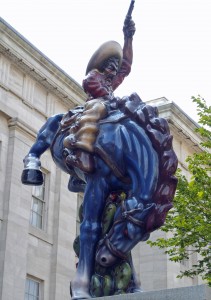 It is a moment of madness. The Mexican-American cowboy with his gun raised skyward and his horse appearing earthbound trying to buck the rider. Vaquero captures one wild moment.

Outside the American Art Museum-National Portrait Gallery on F St. between 7th and 9th Sts. N.W., the 16-foot fiberglass statue is as imposing for its bright colors as its action. Sculpted by Luis Jiminez of El Paso, the Vaquero was first created for Houston in 1982. Critics said it looked like a drunken bandit while advocates said it represented an 1800s cowboys.

Jiminez made a second casting for the Smithsonian site in 1990. It was in storage from 2000-06, according to James Goode’s “Washington Sculptures,” during renovations to the former Patent Office. Ironically, wrote Goode, Jiminez died in a sculpting accident at age 66 the same week Vaquero returned in 2006.