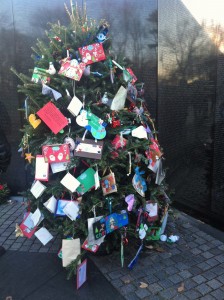 So another holiday has passed (and we don’t have to listen to that horrific “It’s Christmas Eve in Washington” song on the radio. My God I hate that song.

Maybe it was the mild temperatures, but for a town where 60 percent reportedly leave the region for the holidays, it was pretty busy.

The Vietnam Memorial has wreaths nearly every day at the base, but one day there was a seven-foot Christmas tree filled with handwritten messages and even this photo of a soldier I assume is on the wall. It was a pretty amazing sight. 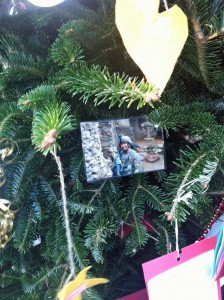 One day found the Lincoln Memorial as crowded as any springtime afternoon. I could barely see the steps for the large crowd.

Arlington National Cemetery was loaded with visitors with one midweek 3 p.m. changing of the guard before a packed audience.

Now that we feel like the Artic off and on for the next two months, crowds will surely lighten. But, it was a nice holiday feeling around the memorials.

Rick Snider is a native Washingtonian, long-time journalist and licensed tour guide since 2010.
View all posts by Rick →
This entry was posted in Washington life and tagged D.C., memorials, Photo by Rick Snider, Washington. Bookmark the permalink.