There are two rabbits who will confuse you like some riddle out of Alice and Wonderland. There are times I’m confused which rabbit is which and I took the photos.

Rabbit Playing Cymbal is in the Hirshhorn Museum’s just a long stone’s throw from the National Gallery of Art’s Sculpture Garden that includes Thinker on a Rock featuring a similarly-looking rabbit.

Maybe it’s the same rabbit and it just outruns me from one to the next. 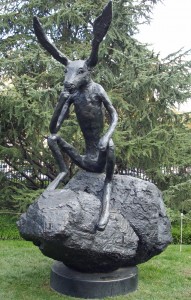 Thinker on a Rocker was created by British sculptor Barry Flanagan, who just loves to create rabbits in all sorts of poses. This one is a tribute to Rodin’s Thinker in 1880. It’s called a “witty and irreverent reference to one of the world’s bets known sculptures.” 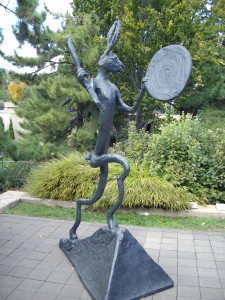 Rabbit Playing Cymbal is a bust for me. I couldn’t find any information on it despite my best attempts. Maybe a reader can help out.

UPDATE – Thanks to a reader I learned Rabbit Playing Cymbal is also by Barry Flanagan. No wonder the two reminded me of each other since Flanagan did both.

3 Responses to Those wacky rabbits