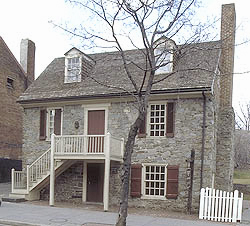 Georgetown has plenty of old bricks, but this stone home along M and 30th Sts. stands out. That’s because it’s the Old Stone House.

Built in 1765, the home is the oldest private home in Washington. The house was built by Christopher Layman, a cabinetmaker who died shortly after its finish. Cassandra Chew then bought it and added a rear wing in 1767. Purchased by the federal government in 1953, it now operates under the National Park Service. With its blue granite exterior, the home is perfect example of pre-Revolutionary life.