Third Infantry — Rock of the Marne 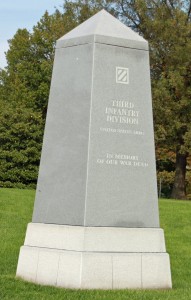 I love monuments that come with explanations. This granite marker in Arlington National Cemetery not far from the Tomb of the Unknowns explains why the Army unit is so important. I’ll simply let it explain itself.

“The 3rd Division was organized at Camp Green, N.C. on 23 November 1917. All units of the division were in France by March 1918. The division entered combat in May. On July 15 it distinquished itself in defense of the Marne River at Chateau-Thierry, forty-five miles northeast of Paris. This act earned the division the proud motto, “Rock of the Marne.”

“The 3D Infantry Division fought with distinction in World War I participating in four amphibious landings in North Africa, Sicily, Italy and France. The division played a crucial role in the defense of South Korea. It returned to Germany in 1957 as part of the NATO defense force and was there when the 3D Division Memorial was dedicated on August 15, 1990.”