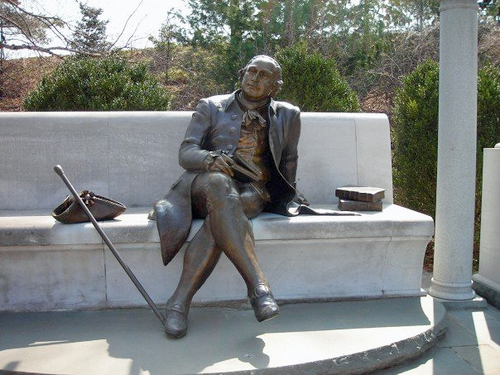 The George Mason Memorial remembers the “Forgotten Founder” who wrote the Virginia Declaration of Rights and was his state’s delegate to the 1787 Constitutional Convention. Mason didn’t signed the Constitution because it didn’t abolish slavery or provide sufficient protection to individual citizens.

Ironically, the Forgotten Founder has a forgotten monument because it’s not very pedestrian accessible. Not many people walk to the Jefferson Memorial where they would come across Mason and there’s not much parking nearby.  Still, it’s fun to sit by the one-third larger than life-sized statue of Mason who’s seated on a bench passing the day while reading. There’s a 72-foot long stone wall and circular pool.