The Polish general in Lafayette Square 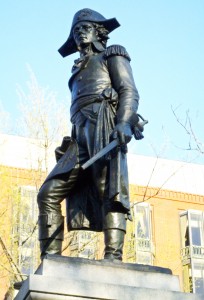 General Thaddeus Kosciuszko was an American hero in so many ways.

The Polish-born general of the Revolutionary War is one of four foreign-born general in the park largely for winning the battle of Saratoga, N.Y.

The statue reflects Kosiuszko fighting for both his Polish homeland and adopted America. Wearing a Continental Army general’s uniform, he holds a map in his right hand of the fortifications of Saratoga. Underneath is simply his name and at the base is Saratoga.

Below Kosciuszko is an eagle whose spread wings protect a globe where the new nation lies underneath as well as a flag, shield and sword. On the right is a wounded Kosciuszko in a Polish uniform giving orders to a Polish peasant. On the left, he’s in an American uniform freeing a bound soldier, which symbolizes the American army. Kosciuszko has a flag in his left hand while a fallen musket and overturned drum are at the youth’s feet. In the rear is the dedication from the Polish people.

Kosciuszko later returned to Poland to fight the Russians. He donated his Ohio lands awarded by Congress to fund a school for African-American children in New Jersey.