The other Taft – Robert A. Taft Memorial 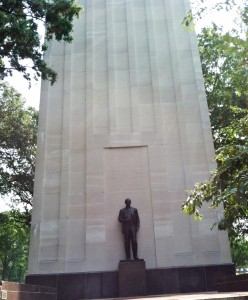 Everyone knows my distant cousin William Howard Taft, the 26th U.S. president and the fattest person to ever serve in the White House. Figure I’d inherit that bloodline.

But few remember his son Robert A. Taft whose accomplishments earned an impressive 100-foot bell tower near the base of the Capitol at Constitution, New Jersey and Louisiana Aves.

A graduate of Yale and of Harvard Law, Taft was a member of the Ohio House of Representatives from 1921-26 and a U.S. Senator from 1932-53, serving the last six months as Senate Majority leader until his death. 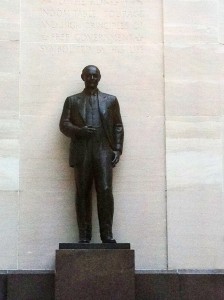 “Mr. Republican” was a real pain in President Franklin Delano Roosevelt’s side during the democratic New Deal of the Great Depression. His grandson Bob Taft was governor of Ohio.

The bronze statue of Taft is 11 feet and sculpted by Wheeler Williams. The memorial was dedicated in 1959 and accepted by vice president Nixon, who was also president of the Senate. President Dwight D. Eisenhower and former president Herbert Hoover attended the ceremony.

This entry was posted in Monuments and Statues and tagged Capitol Hill, Photo by Rick Snider, Robert A. Taft Memorial, Washington D.C.. Bookmark the permalink.