The other presidential assassination spot 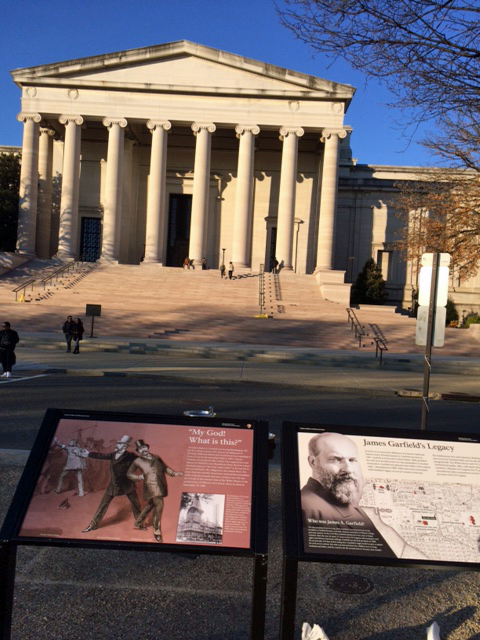 Everyone goes to Ford’s Theatre to see where Abraham Lincoln died. And, thank goodness because that’s a big chunk of my tours.

But, it’s not the only presidential assassination spot in town. James Garfield (my 10th cousin) was shot at what’s now the National Gallery of Art’s West Building. It was the Baltimore & Potomac Railway Station and the new president was walking through it on July 2, 1881 when shot by a madman named Charles Guiteau. It seems Guiteau was told by God to become the U.S. ambassador to France despite no qualifications. When Guiteau was rebuffed, God said to kill Garfield so Guiteau shot him twice. “My God, what is this?” Garfield exclaimed.

Garfield died on Sept. 19, 1881 more from poor medical care than the bullets themselves. And Guiteau was surprised he wasn’t released from prison by a cheering public right up to the point when he was hanged nearly one year later.

Garfield was only president for four months. He’s best remembered by the black statue on the west side of the U.S. Capitol (where buses drop off) because he was a Congressman for 17 years.

Signs over the assassination were recently installed on the National Mall side of the art gallery and aren’t in the exact spot where Garfield was shot. The train station was demolished in 1908.