The Lone Sailor is hardly alone 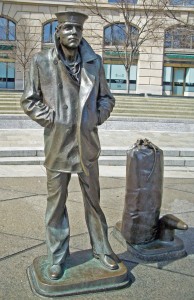 For someone who’s supposedly alone, The Lone Sailor usually has plenty of tourists around him.

Part of the United States Navy Memorial at 7th and Pennsylvania Ave. N.W., The Lone Sailor is a tribute to all the personnel of the sea services. The seven-foot sculpture was created by Stanley Bleifeld in 1987.

The sailor is wearing a traditional uniform underneath his pea coat, which is a dark blue or black wool coat worn by sailors but also very popular among everyday people. He has his canvas bag for all his possessions beside him as well as the docking ring that boats tie up to when in port.

After first using honor guard personnel for models, the sculptor asked for someone more ordinary looking. Then Petty Officer 1st class Dan Maloney became the model. Made of bronze, the statue was mixed with artifacts from eight U.S. Navy ships.

A copy is also at an overlook rest stop just over the Golden Gate Bridge in San Francisco.

1 Response to The Lone Sailor is hardly alone