The lady in white 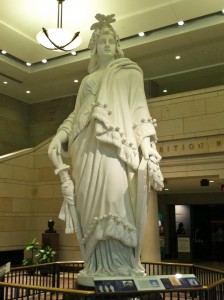 It’s not often a statue gets center stage – twice.

The Statue of Freedom lies atop the U.S. Capitol dome, but also inside the Capitol Visitors Center underneath.

The statue shows the “Lady Freedom” with her right hand on a sheathed sword and her left holding a laurel wreath that means victory and the U.S. shield.

The plaster cast of the statue is in Emancipation Hall in the Capitol Visitor Center. It doesn’t look so big atop the dome, but up close you see its 19½ feet tall and weighs 13,000 pounds.

American sculptor Thomas Crawford made the plaster model while working in Rome in 1857. Clark Mills then cast the bronze statue at his Washington foundry. After an employee refused to remove the cast unless paid more money, a slave Philip Reid was put in charge. Reid was freed shortly before Lady Freedom was placed atop the dome on Dec. 2, 1863.

Rick Snider is a native Washingtonian, long-time journalist and licensed tour guide since 2010.
View all posts by Rick →
This entry was posted in Monuments and Statues and tagged best DC walking tours, Lady Freedom, Photo by Rick Snider, Statue of Freedom, U.S. Capitol. Bookmark the permalink.