The Hiker welcomes you to Arlington National 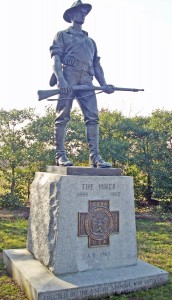 The memorials start long before entering the gates of Arlington National Cemetery. Just after leaving the Memorial Bridge is “The Hiker.”

The 1906 bronze sculpture by Theodora Alice Ruggles-Kitson showing a typical infantry man was recast more than 50 times and often seen in town squares across the country. This one was dedicated on July 24, 1965.