Lee Marvin – The famous neighbor was a Hollywood legend 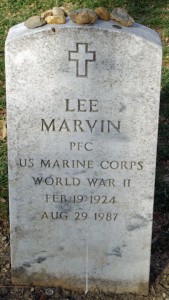 But to Louis’ left is a simple white stone marker containing another legend – actor Lee Marvin. Yes, it’s the famous actor best known for the tough colonel in “The Dirty Dozen” who also won the 1965 Academy Award for Best Actor in “Cat Balou.”

Marvin served as a marine in the Pacific during World War II. He earned a Purple Heart in June 1944 when a bullet severed his sciatic nerve in his hip during the battle of Saipan.

After his discharge, Marvin was working as a plumber’s assistant in New York when asked to fill in for a sick actor. The rest was history.

Marvin also became part of legal history when long-time companion Michelle Triola successfully sued him for assets after their breakup. It became the basis for palimony.