Henry Rathbone’s house – the man next to Lincoln 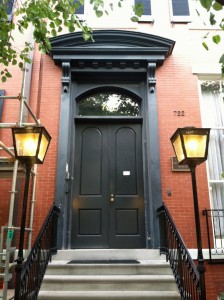 The White House isn’t the only house to walk by the front door around Lafayette Park. A famous bystander to history is a few doors down.

Major Henry Rathbone was in Abraham Lincoln’s box when murdered by John Wilkes Booth. His home is 722 Jackson Place on the western side of the park and near a fountain. The black door and red brick exterior seem fitting with the street that is now mostly government buildings, including Rathbone’s.

The story goes that Lincoln was going to see “Our American Cousin” at Ford’s Theater with Gen. Grant and his wife. But, Mrs. Grant was known to dislike Mrs. Lincoln as many society ladies did. Rathbone was supposedly Lincoln’s seventh choice as others begged off that day while Washington celebrated Lee’s surrender and virtual end of the war. Mrs. Lincoln liked Clara Harris, step sister and fiancee of Rathbone, a son of a wealthy New York merchant. Harris stayed with Mary Lincoln throughout the night as Lincoln lay dying.

Harris and Rathbone weren’t blood related as their parents married after both children were adults. Rathbone and Harris married in 1867 with three children, including future U.S. Congressman from Illinois Henry Riggs Rathbone.

Rathbone was later named U.S. consul to Hanover, Germany where he shot and stabbed his wife to death in 1883. Rathbone spent the rest of his life in an asylum for the criminally insane in Germany. After dying in 1911, Rathbone was buried by his wife in Hanover. However, in 1952 cemetery officials decided there was no family interest in the graves and had the pair exhumed, cremated and poured into the river together.