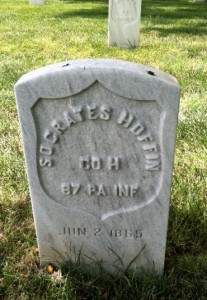 Wandering Arlington National Cemetery’s back regions, I came across a grave that just struck me. Socrates Hoffin – sounded like a cool name. Figured I’d look him up.

And there began the journey. After searching military records that list him as Hoffin, I finally found his real name was Hofius when researching on ancestry.com. I later confirmed it on the regiment’s muster rolls.

The saddest part – he was in the army only three months at the end of the Civil War and died shortly before its conclusion.

Records say the 87th fought several battles in Northern Virginia while Hofius was with them, but nothing on June 2. The regiment lost 202 men during its four years with 90 killed in battle and 112 dying from disease.