Temperance Fountain is all wet 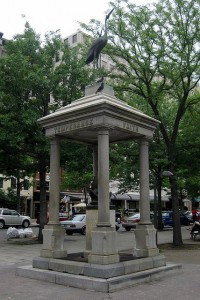 It has been called “the city’s ugliest statue.” Indeed, fine arts commissions were established afterwards to prevent such monstrosities while a Senate resolution once tried to move it.

But the Temperance Fountain at Seventh St. and Pennsylvania Ave. N.W. across from the U.S. Navy Memorial endures. And surely torments. And doesn’t work anymore.

Created by San Francisco dentist Henry D. Cogswell, the temperance crusader donated the statue to the city in 1882 believing if the public had access to drinking fountains they would consume less alcohol. Ironically, it once sat in front of a liquor store.

Faith, Hope, Charity and Temperance are chiseled on four columns with a life-sized heron on a canopy and dolphins underneath.

Alas, you can no longer drink from the fountain, which used melting ice to produce cold water for both people and horses. The city tired of the expense and turned it off.

So raise your glass to Dr. Cogswell for the best of intentions that failed. He wasn’t the first or last dreamer to do so in Washington.

Rick Snider is a native Washingtonian, long-time journalist and licensed tour guide since 2010.
View all posts by Rick →
This entry was posted in Monuments and Statues and tagged free Washington D.C. attractions, Temperence Fountain, ugliest monument. Bookmark the permalink.