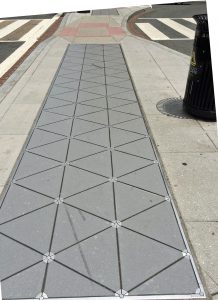 Sidewalks – they’re not the friendliest of places around Washington.

I once fell face down on the sidewalk when kicking a raised section near OPM. I wasn’t badly hurt, but that people actually walked around me without helping angered me even more.

The brick sidewalks in Georgetown neighborhoods can be awful on good days. Missing bricks, broken sections and tree roots crumbling them are constant. The same could be said for Capitol Hill neighborhoods, too.

But there’s one cool section in DuPont Circle that’s literally street smart if sadly penny foolish. The city spent $300,000 for a series of high-tech pavers that create energy to power nearby park lights simply based on the typical 10,000 people who walk over it. They’re on the south end of the circle above Connecticut Ave. between Sun Trust Bank and the Krispy Kreme store.

They’re interesting. The pavers move a little in creating the energy, though not enough to make someone fall. I usually walk on them to do my part for a greener world. But $300,000 seems excessive for such a small return.

Until it’s more cost efficient, this idea should take a walk.