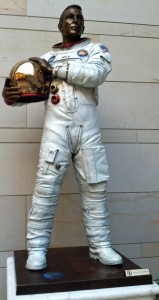 Combat pilot, test pilot, astronaut and elected to Congress – it was quite a life for John Leonard “Jack” Swigert, Jr.

A bronze statue of the Colorado Congressman-to-be stands in the Capitol Visitors Center. Made by George and Mark Lundeen, a copy of the statue stands in Denver International Airport.

After stints as a Korean War combat pilot and test pilot, Swigert joined the NASA Astronaut Group 5 in 1966. He was one of three astronauts on the Apollo 13 moon mission in 1970. The mission was cancelled after an oxygen tank rupture that prompted Swigert to utter the immortal, “Houston, we’ve had a problem here.”

During his successful 1982 campaign to become Colorado’s 6th congressional district, Swigert underwent surgery for a cancerous tumor in his right nasal passage. Unfortunately, it spread to his bone marrow and lungs and Swigert died Dec. 27, eight days before he would have been sworn in.

Side note: I saw this same statue at Denver’s airport when catching a train between terminals.