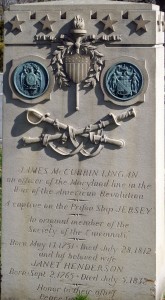 While Arlington National Cemetery didn’t open until 80 years after the Revolutionary War, there are 11 veterans interred there. Nine are in Section 1 in the cemetery’s rear near the Fort Meyer gate while Pierre L’Enfant and Hugh Auld are in Section 2 near Arlington House. This makes Arlington the nation’s only cemetery with veterans from every war.

James McCubbin Lingan was one tough hero of this country who survived a bayoneting and 3 1/2 years as a prisoner of war during the Revolutionary War only to be beaten to death by a mob in 1812 while defending the freedom of the press.

Lingan was a prisoner on the British ship “Jersey” where he refused an offer of $10,000 and a commission to switch sides. Lingan also defended a dead prisoner from soldiers sawing off the dead man’s legs to fit into a smaller casket.

A general by war’s end, Lingan was well regarded by George Washington and appointed a collector in the port of Georgetown, which is now part of the nation’s capital. Lingan later became a founding member of the Society of the Cincinnati.

When a Baltimore paper published an editorial opposing the War of 1812, Lingan defended his friend Alexander Hanson from those claiming the stance was unpatriotic. Lingan and Hanson were escorted to the local jail for protection, but the mob broke in and beat Lingan to death.

Lingan was buried in Georgetown, but later re-interred at Arlington on Nov. 5, 1908.

1 Response to Sons of Revolutionary War at Arlington National Cemetery