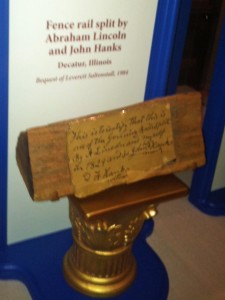 What is it about picking up a shell along the beach far from home? Taking a pine cone from a forest, making one of those pressed pennies from a tourist site?

The Smithsonian Museum of American History’s newest exhibition – Souvenir Nation: Relics, Keepsakes and Curios – shows we’ve have been picking up these chochkies for generations.

Curator William L. Bird best described our fascination by calling them, “a modest little thing that evokes memory [with a] personal connection.”

(Social media was given a preview of the Smithsonian Castle’s exhibit on the eve of the show’s Aug. 9 opening. About 25 Tweeters encircled Bird pecking away on their iPhones. As an old newspaperman and anti-social media proponent until recent years, it was quite interesting to see the younger generation cover an event. It’s a kinder world than my generation of newsmen.)

The exhibit begins with a piece of Plymouth Rock before seeing Napoleon’s napkin, which was large enough to cover a small table. Must have been one messy eater. A stone from the castle that imprisoned Joan of Arc, cornerstone fragment of the Washington Monument, Berlin Wall fragment, piece of the Bastille, fence rail split by Abraham Lincoln, piece of George Washington’s coffin and locks of hair from U.S. presidents from Washington to Franklin Pierce and prominent “persons of distinction” like Samuel Morse, Sam Houston, Clark Mills and Jefferson Davis line the halls. 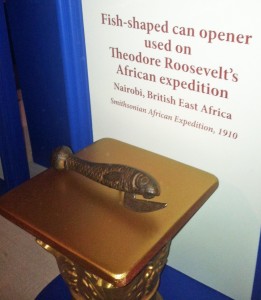 My favorite may have been a can opener from Teddy Roosevelt’s 1909 African expedition after his presidency. Seems he transported cans of Boston baked beans, California peaches and tomatoes that needed opening.

The Smithsonian Castle is always a cool place to visit from its beautiful gardens to red stone floated down the C&O Canal from Montgomery County to the stunning interior halls.