Save George Washington, get a statue – Casimir Pulaski 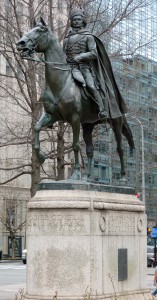 Brigadier General Casimir Pulaski was a Polish count who came to America to fight for freedom. He once saved George Washington’s life, but is best known for teaching American troops the discipline needed to fight the mighty British troops.

Pulaski was known throughout Europe for his bravery and came to the U.S. in 1777 to continue fighting for the cause of freedom. Ben Franklin recommended to George Washington that Pulaski serve in the cavalry. In Pulaski’s first battle at Brandywine, he saved Washington from capture.

Pulaski was made a brigadier general in the cavalry. However, American troops didn’t like fighting under a foreign leader who didn’t speak English so Pulaski resigned from the unit and went to Valley Forge where Washington created a new cavalry of deserters and POWs for Pulaski to lead. Sadly, Pulaski was killed in the Battle of Savannah in 1779.

Ironically, the Revolutionary War hero is shown at the eastern corner of Freedom Plaza in a Polish military uniform with a long cape and a hat adorned with fur and feathers. His feet are in the stirrups and he holds the horse’s reins with both hands. The sculpture rests on an oval base decorated with a band of foliage and Greek key design. Wreathes flank the inscriptions which appear on the long sides of the base.