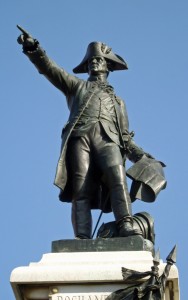 Gen. Comte Jean de Rochambeau is shown in Lafayette Park as a major general of the Continental Army directing his arm with his outstretched right hand with an unfurled copy of the battle plan in his left.

Underneath Rochambeau is the lady figure of Liberty – two flags in her left hand to signify the unity of France and America. He has a sword ready in his right hand to defend the eagle that represents America. The bow of the boat she has just left is seen behind her while the waves break at her feet. The eagle’s right claw grasps the 13 stars that represent the 13 colonies while its left claw fends off opponents. A branch of laurel lies at its feet to signify peace.

On the west side is Rochambeau’s family coat of arms while on the east is a coat of arms representing France. On the rear is a quote from George Washington to Rochambeau that they have worked together as brothers.

Rocheambeau led nearly 7,000 French soldiers as part of France’s aid to America. He was present at Gen. Charles Cornwallis’ surrender at Yorktown, Va. that ended the war.

The statue is a copy of one in Rochambeau’s French birthplace. It was dedicated in 1902 by president Teddy Roosevelt with the Rochambeau family onlooking.