Remembering the unknown dead of the War of 1812 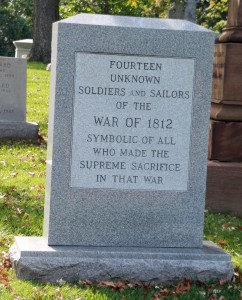 So much attention is given the Tomb of the Unknowns, but there are actually more than 400 unknowns buried throughout Arlington National Cemetery.

Fourteen soldiers and sailors from the War of 1812 are buried together in Section 1 not far from the Custis-Lee House. Go past the Pan American 103 red stone memorial and nearly enter the woods before the granite marker is on the left. The photo makes it look like the marker is crooked, but I think it was more of my being tired at the end of walking nearly five hours around the grounds.

The 14 soldiers were discovered in 1905 by workers at the Washington Navy Yard. The monument was erected in 1976 by the National Society of the United States Daughters of the War of 1812.