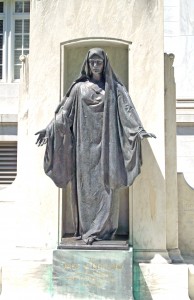 Jane Delano loved nursing so much that on her deathbed in France while inspecting hospitals during World War I, her last words were, “What about my work, I must get back to my work.”

Born on March 12, 1862 near Towsend, N.Y., Delano soon lost her father in the Civil War. She considered the nursing professional “a fine one” and began treating yellow fever victims in 1888 before three years in Bisbee, Ariz. helping typhoid victims. Delano became a superintendent of the Army Nurse Corps from 1909-12 and then chairman of the National Committee on Red Cross Nursing Service. Delano formed 8,000 nurses when the U.S. joined the Great War that was later raised to 20,000.

After her death on April 15, 1919, American nurses raised funds for the monument now at the Red Cross National Headquarters on 17th St. N.W. to honor Delano and 206 nurses that died in World War I. Delano is buried in the Nurses’ Corner at Arlington National Cemetery.

The bronze memorial has a cape over a woman whose extended hands represent a nurse’s readiness to serve. It was dedicated in April 1934 and sculpted by R. Tait McKenzie.