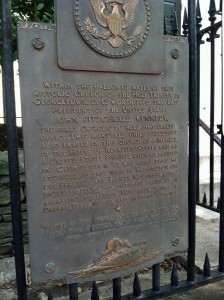 Holy Trinity Church (3513 N. St. NW) was the city’s first Catholic church in 1792. In the early years, parishioners either rented space on the pews or brought their own chair. But don’t worry, today’s 10,000 parishioners have ample room to sit.

In 1862, 200 military wounded and sick were treated here after the Second Battle of Bull Run. The government used the church for one year before returning it with a $350 payment.

This plaque remembers John F. Kennedy worshipping here regularly until his 1963 death. Indeed, it was the last service he attended before assassinated.