Remembering Jackie Kennedy in the park 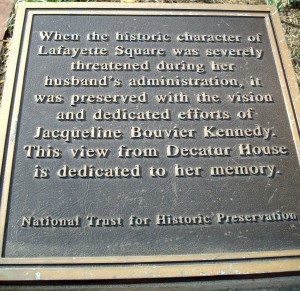 Everyone usually thinks of Jackie Kennedy alongside her husband John F. Kennedy at the eternal flame in Arlington National Cemetery.

But, you can catch a glimpse of her name outside a one-time dorm along 21st St. N.W. when attending George Washington University. And, there’s a nice plaque in front of the Stephen DeCatur House at 16th and H Sts. N.W. at the northwest edge of Lafayette Park.

Why? The First Lady probably saved the White House neighborhood.

When JFK was in office from 1961-63, Lafayette Park was a mess. In 163 years, the seven-acre lot was a race track, dump, grave yard and even the site of a murder that became the first temporary insanity defense.

But thanks to Jackie, it was revitalized during her time to become the beautiful park it is today that thousands of people pass to the White House.