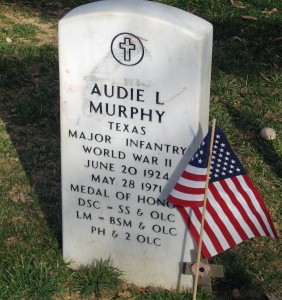 It’s amazing how yesterday’s heroes are today’s forgotten ones.

It happens all the time in society. Singers and actors once all the rage now draw blank stares from teens. Sinatra – is that a first or last name?

So it goes with Audie Murphy. Whenever someone asks me where his grave is at Arlington National Cemetery I usually figure they’re at least 70 because no one under 50 has ever asked me and those less than 30 have no idea who he is.

Murphy is buried very near the Memorial amphitheater where the sidewalk bends to accommodate more people by the corner grave. At one time it was the second most visited grave at Arlington behind John F. Kennedy.

Murphy lived an incredible life of helping others. He was the most decorated soldier of World War II after enlisting at age 17, winning the Medal of Honor plus 32 medals, ribbons and citations that included five from France and one from Belgium. After once single-handedly battling Germans for one hour using a machine gun from a burning tank, he simply said, “They were killing my friends.”

Murphy became a movie star after the war, appearing in “To Hell and Back” based on his autobiography of 27 months fighting in Europe and 43 other films.