Remember the Alamo and Graceland – my vacation road trip 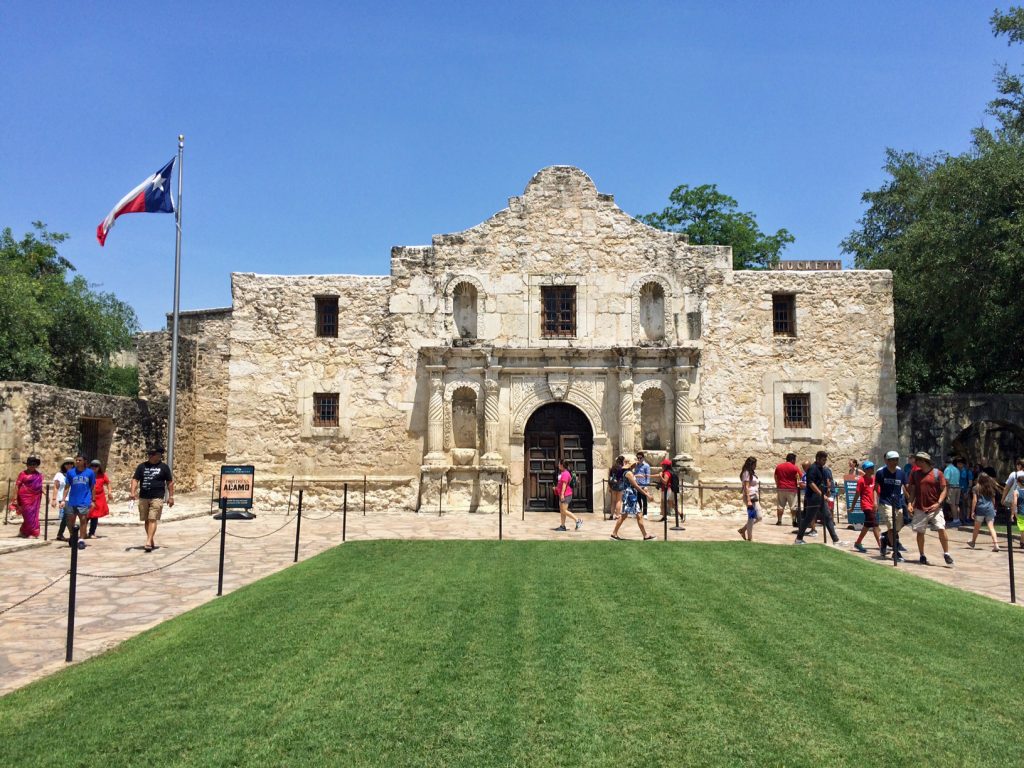 I’ll remember the Alamo and much more off my recent vacation that snaked 1,046 miles from Memphis to San Antonio.

Yes, tour guides travel sometimes for pleasure, too. My wife and I aren’t ones to just sit on the beach (hot and boring) so we usually see cities. But, in my quest to reach 50 states, we’ve taken some long rides the last two years. I knocked off Idaho, Oregon and Montana during a five-state journey last year highlighted by Yellowstone Park. This time, I reached 45 states by adding Arkansas and Oklahoma between Tennessee and Texas.

(I know – what’s left? Vermont, Nebraska, Iowa, Alaska and Hawaii. I figure by 2021 I’ll be a 50-stater and then think about traveling to all seven continents. I’ve currently seen Europe and Asia as well as North America. I have this retirement fantasy that after seeing Hawaii, we keep going to Australia, head over to China for the Great Wall, then fly home via South Africa and South America. Antarctica will be the last continent with my sons-in-law so someone can save me from the penguins.)

Anyway, here’s a quick summary of my recent Americana journey. 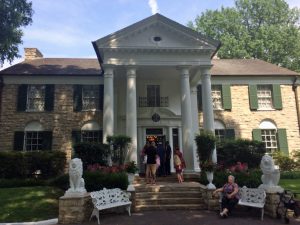 Day 1: Nothing like frequent flyer miles to cause a longer trip. We flew to Memphis via Dallas (yes, I know that was backwards) and saw Graceland. I hadn’t been to Elvis’ home in 20 years and it was the first time for my wife. The key difference from my first visit is a small city of related Elvis museums, planes and restaurants across the street. Wow, what a change. The house itself looks smaller than it is and there’s lots of cool memorabilia. Of course, the tour ends at Elvis’ grave.

We then stayed at the Pyramid on the river, which has a hotel and the biggest Bass Pro you’ve ever seen. They have live alligators! The hotel was awesome. I worried it would be the best of five different hotel rooms that week to spoil us, but the best was still to come.

Day 2: We saw the assassination site of Martin Luther King, Jr. and Beale Street before leaving town. I talk about MLK on tours all the time so it was fitting to see where it all ended. Lots of folks there. 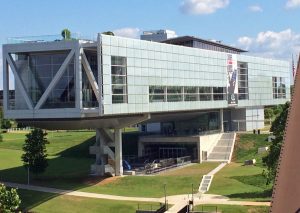 It was only 100 miles to Little Rock, Arkansas on a holiday weekend with no road construction. We dodged a real bullet there. Little Rock is a quaint little town. Our focus was the Bill Clinton Presidential Library. Yes, it was really starting to get hot as our trip was about 100 degrees every day, but that didn’t deter us from also walking over the big bridge by the library to see the city. The library did a good job of meshing video with events of his presidency. It’s a couple hours reliving the ‘90s.

We stayed at the Capital Hotel where the service was just awesome. I heartily recommend it. The post-Civil War hotel includes the widest elevator you’ll ever see, supposedly so President Grant could bring his horse inside during a visit. 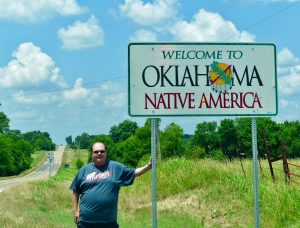 Day 3: On to Dallas. Oh, this was gonna hurt. It took seven hours with stops and detours. OK, it was partly my fault. I wanted to add Oklahoma to my life so I detoured at New Boston, Texas to travel about 25 miles north and catch a corner of Oklahoma. Hey, it counts.

We stayed at the Grapevine Mills Hilton where I used to cover NFL meetings about 20 years ago. It was kinda sad thinking 20 years had passed since haunting the halls waiting for team owners to talk. Where does the time go? I scheduled three days in one city in the middle of the trip so the vacation didn’t feel like endless moving. 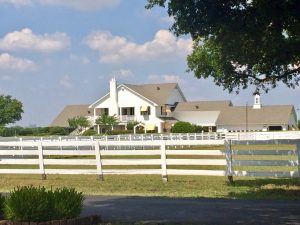 Day 4: Remember the old (and briefly new) TV show Dallas? The exteriors of Southfork ranch were filmed for the 1977-91 show. We took the tour, which included walking through the home, seeing JR Ewing’s grave, longhorn cattle and Jock Ewing’s car. Just walking the grounds with few people around was really fun. The TV show said Southfork was 100,000 acres, but this ranch is about 340 acres. 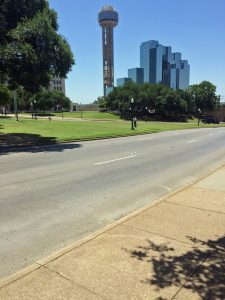 Day 5: Time for some serious grinding. We visited the spot where John F. Kennedy was assassinated in 1963.The Sixth Floor Museum lets you see where the shot was taken before heading outside to see a big X on the street where Kennedy was hit. Lots of expanded video as well as stories on Kennedy’s life in the museum.

We spent the afternoon at the Fort Worth Stockyards, which is basically a small tourist area that gives the feel of the old west, including twice daily cattle drives through the streets. The longhorns seemed to know the way without guidance.

By the way, Dallas highways are 75 mph and have the highest exit ramps I’ve ever seen. Now I know where they’re called flyovers. I wasn’t sure if I was driving a car or plane. Heights don’t bother me that much, but sometimes we were so high I needed to concentrate on the car in front of me than the ground seemingly a mile below.

Day 6: On the road again. (Sorry Willy, it seemed like Brooks and Dunn’s 1990s music is played most places in the background.) This time it was a three-hour drive to Austin, another state capital off the list (though I’m not trying to reach all 50.)

Of course, we stopped at the Lyndon B. Johnson Presidential Library on the grounds of the University of Texas. I was a kid during LBJ’s time, but I remember him as being bigger than life. The grainy black-and-white video included a great clip of Johnson saying he wanted to be the president that fed the hungry and educated children. “Can you help me?” he said. “Can I hear your voices?” Gave me chills. 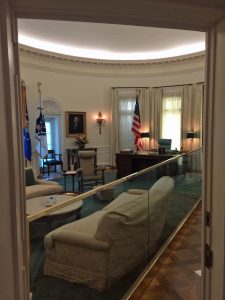 Like the Clinton library, there was a replica of the Oval Office. I don’t ever expect to be in the real one so it’s pretty interesting to stand inside the copy and imagine how it really works inside the White House.

Austin claims their capital dome is seven feet higher than Washington’s Capitol. Well, the ground is a higher elevation. The dome is a modest version of the one in Washington. The state house dome in Madison, Wisc. Is a closer copy to Washington’s.

Austin is known for its music and food so we saw both at the Broken Spoke. Two-stepping with a live band was a fun evening. 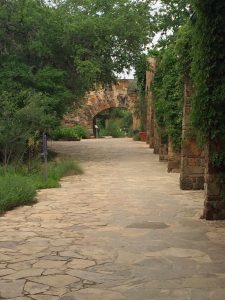 Day 7: We started by seeing the Lady Bird Johnson Wildflower Center outside of town. Kinda small and the sign saying watch for rattle snakes was a little jarring, but the place is a nice tribute to the First Lady, who advocated protecting open spaces. It’s worth one hour.

Finally, it was a couple hours to the Alamo. People told me not much is there and I didn’t expect a lot given it has been almost 200 years. But, you gain a real sense of what these men did in fighting to the end to win the war even if they lost the battle and their lives. How they held off the overwhelming Mexican army for two weeks was amazing. 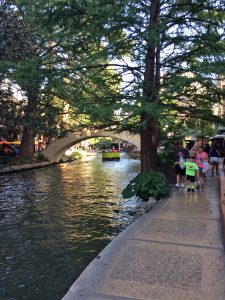 The last evening out was spent along Riverwalk, a man-made canal filled with restaurants and shops. It’s great fun.

And, the best hotel of the trip was the Valencia right on the Riverwalk. Huge room and free sangria at the front desk when checking in.

So that’s it – lots of this and that. My wife asked which attraction was my favorite? I really didn’t have one. They were all cool in seeing things I’ve long heard about and finally saw in person.