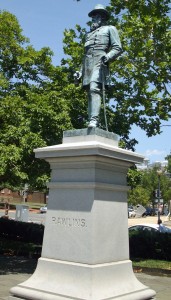 General John Rawlins’ best move was living next to Ulysses Grant when the Civil War started. Grant returned to uniform and took Rawlins with him.

Rawlins was a former gold prospector and attorney who managed to keep Grant largely sober during the war. For that, Rawlins was promoted each time Grant was in serving as his advisor. But that was the extent of Rawlins’ military expertise. He died at age 38 of tuberculosis.

Today, the statue is in Rawlins Park by 18th St. and New York Ave. N.W. just a block away from Eisenhower Executive Office Building. It’s a nice park, but the reflecting pool is disgusting. The place needs some TLC.

The bronze statue started at this location in 1874, then was moved four times before returning in the 1950s. Joseph Bailly was the sculptor.