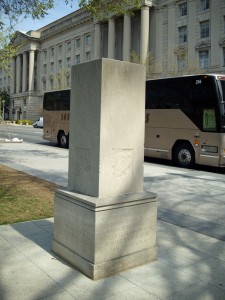 It’s the most nondescript marker in town. You’ve probably walked right by it on 15th St. N.W. by the many tourist trucks just short of Pennsylvania Ave. and never noticed it.

The Patentees Memorial is a simple six-foot granite marker commemorating the 18 original landholders of the District and their occupations up to 1700. It was erected by the Daughters of the American Revolution in 1935.

It has names on all four sides of the base starting with Robert Troope in 1663. Each side of the monument contains a relief panel carved with a symbol of the early pioneers’ agricultural pursuits. 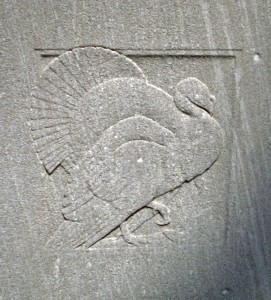 On the east side is a tobacco plant. It was the cash crop of the American colonies. On the south is a wild turkey, which were abundant back then and has since become an American tradition to eat on Thanksgiving. On the west is a stalk of corn, which native Indians showed colonists how to use as food and fertilizer for crops. On the north is a fish. The Potomac River was even closer nearly and fish were a staple food.