One Destiny is one play not to miss 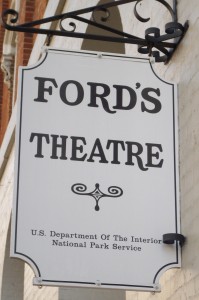 The ticket is just $5. The play is 35 minutes plus a 10-minute question-answer with the actors. And, you can see the museum, too.

But forget all of that. One Destiny at Ford’s Theatre doesn’t need any help to make it a success. It’s a winner on it’s own.

The night of April 14, 1865 when president Abraham Lincoln is slain by John Wilkes Booth is remembered by Ford’s owner Harry Ford and actor Harry Hawk, played by Michael Bunce and Stephen Schmidt respectively.

The two recreate the day’s events seen by several people. Bunce is brilliant and can make some amazing faces while Schmidt’s acting is simply strong. For tourists in town or any history buff, it’s a nice quick lesson on the night.

A family walked up to the line behind me asking what it was about. I said they couldn’t lose trying it, not for $5 each. Given the museum’s makeover complete with super statues, they received a bargain.

Unfortunately, the spring run of the play ends July 2. So, head out now.