On the Trail of John Wilkes Booth: Edman Spangler grave 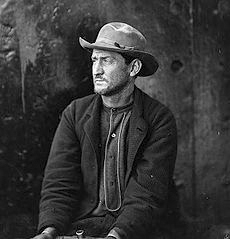 Whatever happened to the men and women that conspired to kill Abraham Lincoln?

This is Edman Spangler’s story.

Spangler worked at Ford’s Theater as a carpenter and scene shifter. He helped set up the President’s box for that evening; moving furniture and removing a partition between another box to make it bigger. He then had a drink with assassin John Wilkes Booth and other stagehands.

Booth returned around 9:30 p.m. and asked Spangler to hold his mare. Spangler was too busy so another theater employee did so. Supposedly, Spangler later told another stagehand not to say which way Booth fled, which led to his arrest as an accomplice. Spangler was given the lightest sentence among conspirators – six years at Fort Jefferson in the Dry Tortugas off Key West, Fla.

In 1869, Spangler was pardoned by President Andrew Johnson and returned to the Washington area to find fellow inmate Dr. Samuel Mudd, who was imprisoned after setting Booth’s broken leg. Spangler lived on Mudd’s Waldorf, Md. farm until his Feb. 7, 1875 death. 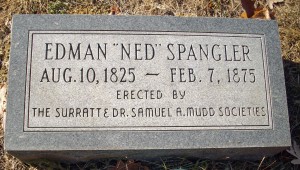 You can visit Spangler’s grave just a few minutes from the Dr. Mudd House in the old St. Peter’s Church cemetery. It’s the far corner from the church sign, ironically near a satellite dish.

The interesting part of the grave marker, which was erected around 1986, is it says Edman Spangler, not Edmund or Ned as commonly known. The stone was erected by the Surratt and Mudd societies and you better believe they didn’t make a mistake. Talking to a Surratt official, she meticulously researched Spangler’s name.

The grave was located through old area residents recollecting its spot and sonar confirming the tomb’s location. The graveyard has a few dozen markers, including many Mudd family members. The empty area in the middle was where the old church was located. It now stands a few miles away. I know because I was married at the rebuilt St. Peter’s in 1980 and live a couple miles away.

The Spangler grave is a nice brief stop when following Booth’s trail through Southern Maryland.

1 Response to On the Trail of John Wilkes Booth: Edman Spangler grave