On the edge of Arlington National: Medgar Evers 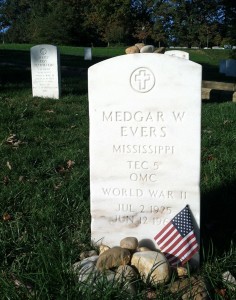 I like to wander the edges of Arlington National Cemetery, by forgotten graves far from the hordes of visitors who don’t stray far from the Kennedy flame and Tomb of the Unknowns.

It’s peaceful, feeling like a cemetery instead of a tourist area. And, you’ll find the most interesting people on the edges.

With a race blocking access by most entrances one morning, I decided to park at the Iwo Jima memorial and walk into Arlington from the side entrance gate. It’s a little longer of a walk, but there’s nothing short about walking around ANC.

I came to the farthest grave on one side and decided to just see who it was. I was quite surprised I knew the person — Medgar Evars.

Evans returned from serving in World War II to become active in the civil rights movement, especially n the desegregation of the University of Mississippi. He was murdered on June 12, 1963 by Byron De La Beckwith of the White Citizens Council (Ku Klux Klan.)

Two juries of all white men were deadlocked on Beckwith’s guilt, but new evidence brought a murder conviction in 1994 — 31 years later. Beckwith died in prison in 2001.

Evers death was remembered by Bob Dylan in the 1963 song, “Only a Pawn in Their Game.” The 1996 movie “The Ghosts of Mississippi” focused on the second retrial.

2 Responses to On the edge of Arlington National: Medgar Evers