Off The Record – for a drink 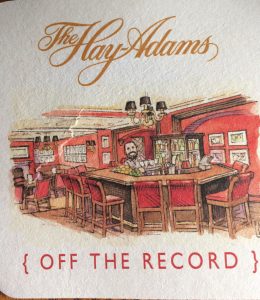 Some new folks to town wanted to see the sights . . . and some bars. So, why not start with Off The Record at the Hay Adams Hotel?

It’s a little tricky to find, which is probably how some folks like it. Go through the lobby to the left and take the stairs down to the bar. The lobby staff is so professional that someone will surely show you the way. (By the way, you can take the elevator up to the lobby, but not down to the bar.)

Off The Record is a real stunner when you walk through the door. Like bam- here’s a bar. An old-school place where people go to have some privacy. Legends says that’s why it’s named off the record. And, right on cue some White House staffers came in after work.

The cool thing is the pads for your drinks. There are drawings of many famous folks like those on the wall. So, try something different with an air of class.

Rick Snider is a native Washingtonian, long-time journalist and licensed tour guide since 2010.
View all posts by Rick →
This entry was posted in Washington life and tagged best bars in Washington, Best Washington DC walking tours, Hay Adams Hotel, Off The Record, Photo by Rick Snider. Bookmark the permalink.