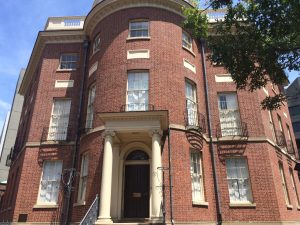 I have driven past the Octagon House hundreds of times because my wife worked on the same block for 30 years. I never knew its full story; just that it was an oddly-shape corner building near the White House at 18th St. and New York Ave. NW.

Designed in 1801 by William Thornton, who was the first architect of the U.S. Capitol, the house served as a temporary home to president James Madison after the British burned the White House in 1814. The British left the house alone because it was a temporary embassy for France. Today, it’s a museum of Washington’s early days.

The three-story house includes a circle, two rectangles and a triangle in its floorplan. Many building materials are local, including Aquia Creek sandstone. The decorative materials came from England. It was named a National Historic Landmark in 1960. 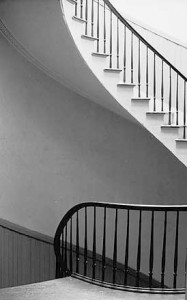 Some say it’s haunted by two daughters of the original owner – Col. John Tayloe, a prominent Virginia planter who built the house at George Washington’s urging. In separate instances, a daughter arguing with Tayloe on the upper stairs fell to her death. Some say ghosts of slaves that once lived in the rear of the home now haunt it.

Oh, one more thing. It has six sides, not eight like an octagon. Go figure. Not the first number that was fudged in Washington.