Statue of Dr. Philip Jaisohn looks like the real thing

Many statues kinda, sorta, maybe look like the person. Given many of the subjects are long dead, it’s not always easy to know how striking the likeness may be.

But outside the South Korean Embassy along Massachusetts Ave. is not only a statue of Dr. Philip Jaisohn, but a second monument explaining the first. The statue matches the photo very well.

Now that’s service. I’m just going to let the board speak for itself.

“Dr. Philip Jaisohn was a pioneer of independence, democracy and public awakening for Korean people. After the failed 1884 reformation movement, he was exiled to the United States where he became the first Korean-born to become an American citizen. A graduate of Columbian Medical College, he 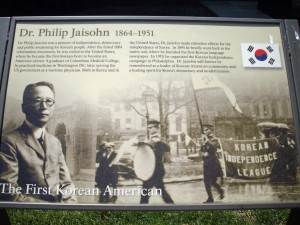 practiced medicine in Washington DC, later serving the US government as a wartime physician. Both in Korea and in the United States, Dr. Jaisohn made relentless efforts for the independence of Korea. In 1895, he briefly went back to his native soil where he founded the first Korean language newspaper. In 1919, he organized the Korean Independence campaign in Philadelphia. Dr. Jaisohn will forever be remembered as a leader of Korean-American community and a leading spirit for Korea’s democracy and modernization.”