No bowing, she’s not the queen 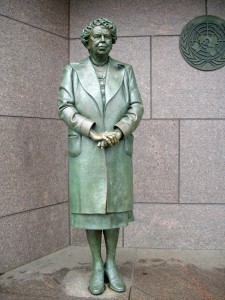 You never know what kids will say. I asked some youngsters who I was standing next to and “The Queen of England?” was the first response.

Well, I must admit she does look a little like Queen Elizabeth, but it’s actually former First Lady Eleanor Roosevelt. Its location at husband’s FDR Memorial should be a dead giveaway, but kids don’t always make the connection.

Eleanor is standing next to the United Nations symbol given her staunch support for it. She’s the only First Lady honored with a statue at a presidential memorial. Given Eleanor served the longest of any First Lady and often spoke for her husband at events, she certainly deserves it.