More than a pile of rocks 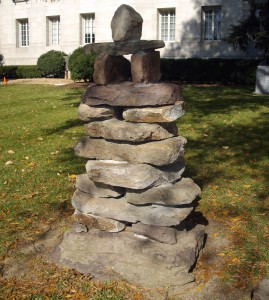 The grounds of the Organizational States of America are filled with artwork. One looks like a pile of rocks. That’s because it is.

According to a nearby marker, the stones are an Inuksuk — “A northern stone land marker used by the Inuit for navigation, communication and to mark hunting and fishing grounds; it symbolizes the traditional Inuit way of life.

“Canada presented this Inuksuk to the Organization of American States to celebrate its 20th anniversary of membership and to underscore its commitment to the hemisphere. This Inuksuk was built in April 2010 by artist Peter Irniq.”