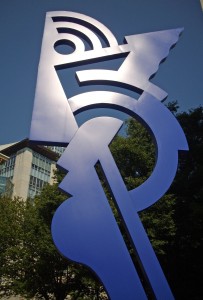 I walked past Modern Head several times and didn’t see him.

I took this photo and still didn’t see him.

But once I looked at the photo in the right angle — there he was. Wow, it sure took me long enough, but there’s the face, the mouth – it’s art that you have to hold still for a moment to get.

On the corner of the American Art Museum at 8th and F Sts. across from the Spy Museum, the blue painted stainless steel sculpture is by Roy Lichtenstein (1923-1997) who created it in 1989, 15 years after first conceiving the piece.

Modern Head is part of Lichtenstein’s belief that man and machine are interwined. It has some of that 1930s art deco influence. The first one was installed in 1996 in Battery Park and survived the 2001 fall of the Twin Towers. It’s illustrated in a sign by the Modern Head here in Washington.

Our Modern Head was donated by Jeffrey Loria in honor of his late sister Harriet Loria Popowitz. I know Loria best as the former owner of the Florida Marlins.