MLK Memorial controversy is so typical of Washington gridlock 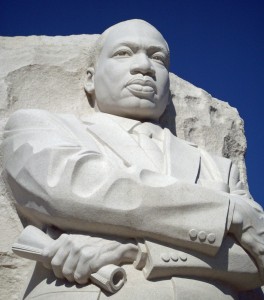 I take no stance on whether the drum major quote should be changed on the Martin Luther King, Jr. Memorial. I’ll let more educated minds decide the matter.

But what truly fascinates me about this whole controversy is how it ever happened. Certainly dozens and dozens of people must have seen the “I was a drum major for justice, peace and righteousness” quote on the right side of King during the planning process. At least, lots of people should have seen it.

Did nobody bring up this concern that is so big the National Park Service will actually strip the quote, requiring a five-inch deep cut into the granite? This is a town where everything is studied to death before any movement occurs, yet there wasn’t proper input to make officials say, “Wait a minute.”

Part of me thinks this is just part of the gridlock that extends beyond Washington’s streets. It seems we’re good at fighting about things more than agreeing. Some people think King looks too stern. Should they alter his face for a smile so those people are happy, too?

Do we now “fix” other monuments around Washington? If King needs altering, then do it. But, I fear this sparks a dangerous trend and we’ll have a revisionist surge to make historic places comply to current times.