Men of science in Museum of the Bible 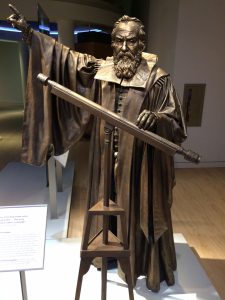 It would seem a strange sight at first. Men of science in the Museum of the Bible. But, the displays show the two are not incompatible.

Galileo is shown with his telescope. The 17th-century scientist is known for saying the sun was the center of the universe at a time when people believed Earth was the center. When church leaders challenged Galileo, he said the Bible tells “how to go to Heaven, not how the heavens go.” 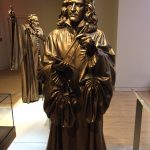 Sir Isaac Newton is known for his theories of gravity prompted by an apple hitting him in the head. The 18th-century physicist believed to know nature is the know God and that God provides order to the universe.

George Washington Carver was born into slavery in 1860, but grew to one of the 20th century’s leading botanists and inventors. He created more than 500 agricultural inventions and 300 uses for peanuts. Carver referred to his laboratory as “God’s little workshop.”